In terms of its social responsibilities, Willard Batteries has a history of giving back to the community. It made a significant contribution with the Go Green, Go Willard campaign which helped raise funds for Food & Trees for Africa and which helped plant thousands of trees in schools and other areas across South Africa .

Willard Batteries has continued to give back through its limited edition battery range, these previously including: 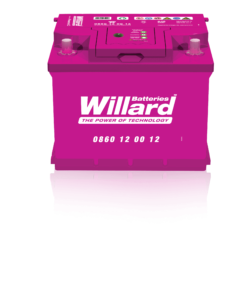 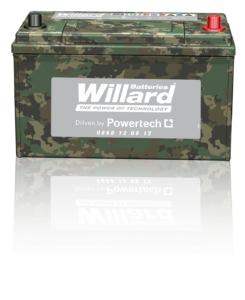 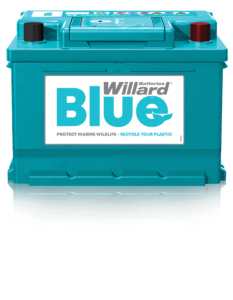 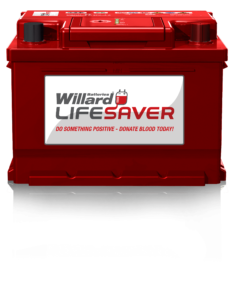 How to Remove & Fit a Car Battery

The removal and fitting of a vehicle battery is usually a simple task that can be done on your own with basic tools you likely have on hand.

How to Use Jumper Cables

We’ve all experienced it: you go away on holiday for a couple of weeks or leave the car lights on. Then, when you try to start the car, nothing happens. When your car battery is dead, you need two things: a set of jumper cables, and an obliging person with a car and a working battery.

STEP 1: Connect one cable to the positive post of the discharged battery.

STEP 2: Connect the other end of the same cable to the positive post of the booster battery.

STEP 3: Connect the second cable to the negative post of the booster battery.

STEP 4: Make the final connection of the second cable to engine block or chassis of the stalled vehicle.

STEP 5: Crank the engine of the stalled engine.

Always refer to the owner’s manual for the correct jumpstarting procedure for your vehicle.

How to Test if your Car Battery is Flat

Do you remember when you last had your car battery checked? The summer heat and winter cold take a big toll on your car’s battery, which could wind up leaving you stranded.

If it’s been a while, or it has been a rough season for your battery, now is the time to have it tested.

Avoid testing the battery directly after the car has been driven, since surface charge in the battery might give erroneous voltage readings and you might then think the battery is OK, when in actual fact it is not. Rather let the vehicle stand for a while before testing or run some of the larger electrical consumers like lights or heating blower for a couple of seconds, to get rid of surface charge.

Select the DC voltage measurement function on your multimeter, then consult the user manual for instructions.

The resting voltage should ideally be no lower than 12.6V. When a battery goes down to 12.2V, it’s actually only 50% charged, and below 12V it’s classed as discharged!

If you measure less than 12.6 volts, use a Smart Charger to charge the battery, without disconnecting it, to avoid any risk to the vehicle electronics.

When not using a Smart charger, remember that disconnecting a battery without a slave battery in place is not advised, as modern cars may lose memory settings.

If in doubt, always refer to the instruction manual.

Battery analysers are recognised worldwide as the standard for determining battery condition and provide a host of benefits:

How to Know which Willard Battery is Needed for your Vehicle

The majority of batteries found in most modern-day vehicles are lead-acid and offer a very good compromise between reliability, usability, robustness, availability and price.

AGM and EFB batteries are characterised by their high performance and thanks to advances in battery technology, they need less maintenance and are more reliable than 10 years ago.

Conventional flooded batteries are the most common and economical lead-acid chemistry and are suitable for conventional vehicles. Some are classified as SMF (Sealed Maintenance Free), where no maintenance of the electrolyte levels is required.

Enhanced Flooded Batteries are referred to as EFB’s and are designed for Start-Stop applications. They are different to Conventional Batteries in that: They cycle better, they accept charge better, and they have a wider operating range of temperatures.

Increasingly used as replacements for conventional batteries, EFB’s must only be used in vehicles whose electrical systems are designed for EFB’s or Conventional Batteries.

Absorbed Glass Mat Batteries are referred to as AGM’s and are valve regulated lead acid (VRLA) batteries. Valve Regulated batteries are equipped with a pressure release valve for safety and oxygen recombination. AGM’s offer better performance than Conventional Batteries in that: They cycle better, they accept charge better and they have no water loss.

AGM’s must only be used in vehicles whose electrical system was designed for these batteries.

How to Recycle your Willard Car Battery

Although batteries are not thought to be as harmful as they once were, it’s still important to environmentally minded consumers to recycle batteries responsibly.

Batteries still contain substances that can be harmful if not disposed of properly. The good news is that lead acid battery recycling is one of the most exceptional environmental success stories of our time.

Potentially a noxious product that contains substances that can harm the environment, Willard Batteries encourages the recycling of these scrap batteries.

The life cycle of a Lead-Acid battery follows a continuous, closed loop. The typical new lead-acid battery is 99% recyclable and when a scrap battery is collected and returned to Willard Batteries, its lead and plastic are reclaimed and directed to new battery manufacturing.

Consumers can return their scrap battery when they install a new battery, or for more information, they can phone 0860 12 00 12.

There is often confusion when battery deﬁnitions are used to explain various aspects of the lead acid battery eg. sealed, maintenance free and other descriptive terms. The explanation of terms below is based on deﬁnitions contained in the IEC (60095-1 :20U6) speciﬁcation for lead acid starter batteries and is meant to provide clarity in terms of the various terms used to describe batteries.

A secondary battery that is closed under normal conditions and has an arrangement that allows the escape of gas if the internal pressure exceeds a predetermined value. The battery cannot normally receive an addition of water or electrolyte. In this type of battery, the electrolyte is immobilised. This means that the acid is held in either a gel or a glass mat structure.

The valve regulated battery is often called a sealed battery because no addition of electrolyte or water is possible. However, the battery will have a pressure release vent to allow for the escape of gas generated by the battery.

Vented starter batteries may be designated as “low water loss” according to the IEC specification if the water loss of the battery is less than 4 grams per amp hour.

Vented starter batteries may be designated as “very low water loss” acoording to the IEC specification if the water loss of the battery is less than one gram per amp hour.

Some specifications use the term “maintenance free” to describe a battery that has a water loss below a certain level. The IEC specification does not use this term, but rather uses the terms low and very low water loss.

For a battery to remain in good working order, it should be maintained in a fully charged state by the vehicle’s charging system. Where a battery is used as a means of alternative power, it is generally charged by means of an independent charger or rectiﬁer which supplies controlled direct current (DC).

An independent charger is also used to charge motor vehicle batteries that have become discharged due to faulty alternators, charging systems or if left unused for prolonged periods.

If the following hints are adhered to, a battery will provide extended and trouble free service.

The following procedures can be used for the removal and ﬁtment of an automotive battery:

Battery acid is a poisonous and corrosive liquid, which will cause burns and irritation to the skin and eyes. Take precautions when charging as sulphuric acid is given off in a fine mist.

Hydrogen and oxygen can be generated and emitted.

An explosive atmosphere is created if the concentration of hydrogen in air exceeds 4%.

Electrical energy can be supplied from batteries and charging equipment.

*Burns may occur from the heating effect of tools and conductive objects in contact with live battery terminals or conductors. In addition, sparks and molten metal may be ejected and combustible materials, notably the gaseous fumes, ignited to cause potentially lethal explosions.*

*It is possible to receive a severe electric shock from charging equipment and from a number of batteries connected in series i.e. five or more 12 volt batteries (+60 volt nominal).

Potentially a noxious product that contains substances that can harm the environment, Willard Batteries sees it as its responsibility to recycle scrap batteries. The life cycle of a lead-acid battery follows a continuous, closed loop. When a scrap battery is collected and returned to Willard Batteries, its lead and plastic are reclaimed and directed to new battery manufacturing.

Certain battery prices are subject to the return of an equivalent scrap battery. Dismiss

Click one of our representatives below to chat on WhatsApp or send us an email to info@battery24.co.za

Sales Edgemead Jeandre Theart Available from 08:00 to 18:30 Available on SundayMondayTuesdayWednesdayThursdayFridaySaturday

General Sales Leonard Barnard Available from 08:30 to 17:30 Available on SundayMondayTuesdayWednesdayThursdayFridaySaturday

Sales brackenfell Nico Louw Available from 08:00 to 17:30 Available on SundayMondayTuesdayWednesdayThursdayFridaySaturday

Technical Support Wimpie McCarthy Available from 08:00 to 18:30 Available on SundayMondayTuesdayWednesdayThursdayFridaySaturday

Sales brackenfell Llewellyn Dippenaar Available from 08:00 to 18:30 Available on SundayMondayTuesdayWednesdayThursdayFridaySaturday